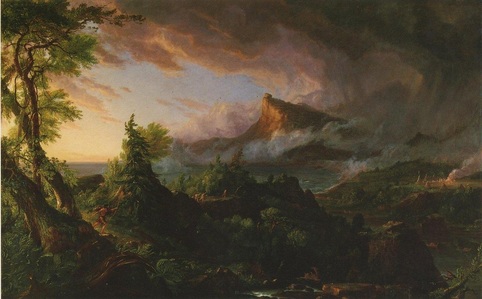 Thomas Cole, The Savage State (1834)
Textual Analysis and Argumentation (current)
Textual Analysis and Argumentation provides students an early American literature survey in a global context.  The fall semester focuses on the age of exploration  through the seventeenth century, and the spring semester focuses on the rhetoric of liberation during the American Revolution, discourse about the American landscape during the westward migration, and the growth of the abolitionist movement through prose and poetry. Students master close reading for form in thematically related clusters of texts and learn to create precise thesis statements based on these readings. They learn to structure their essays with increasing sophistication and are introduced to, and become competent in, MLA style. 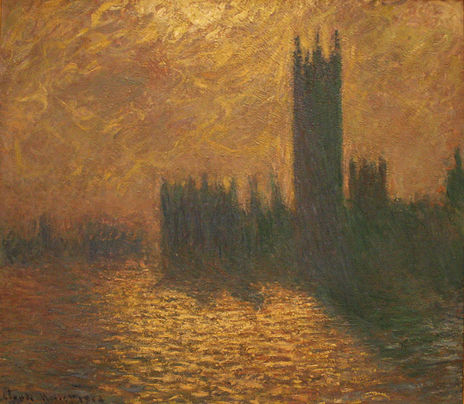 Claude Monet, Houses of Parliament, Stormy Sky (1904)
AP Literature and Composition (current)
AP English Literature and Composition is broken into two thematic units. The fall semester focuses on the theme of “wonders in paradise,” looking at the dual meaning of “wondrous” as both monstrous and miraculous. Although the course focuses on the seventeenth century, it incorporates an emphasis on intertextuality; thus, we also consider postcolonialist writers who approach this theme through the figure of Caliban. The spring semester focuses on the theme “states of ecstasy” wherein we look at inward and outward landscapes. The course considers literary history from the Romantics onward while incorporating art history to supplement this discussion. Concomitant with our discussion across both semesters, students will begin to read and theorize advanced theoretical approaches to literature. 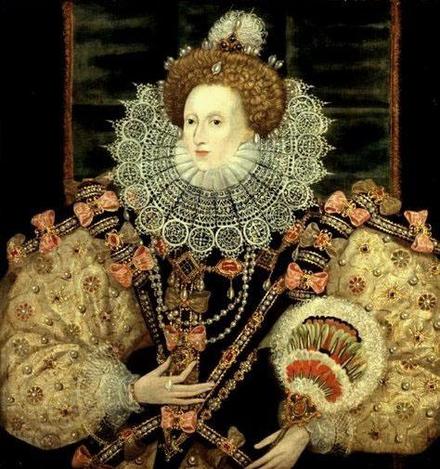 George Gower, Portrait of Queen Elizabeth I (1588)
Advanced Topics in Literature: Gender and Clothing in Shakespeare’s Plays (forthcoming Spring 2015)
This course will examine the ways that clothing affects representations of female characters across a range of Shakespeare's genres: comedy, the so-called “problem play,” romance, and tragedy. We will examine the way that Shakespeare links clothing with theater to trouble the categories of both gender and genre. Questions that will guide our inquiry are as follows: What kind of claims does Shakespeare make about men and women through clothing? Does Shakespeare attribute certain gendered characteristics to nature or performance? How does genre affect the way that Shakespeare uses clothing to talk about gender? Students will read a range of Shakespeare’s plays as well as a selection of historical documents that provide a context for the ways that early modern English people considered the importance of clothing when it came to gender and class.

Temptation of Sir Gawain (c. 1400)
Literatures in English to 1700 (2012-2013)
The aim of this course is prepare you for advanced study in English literature. Our focus will be literature written in English before 1700, a period of fascinating historical, political, social, and linguistic transformation. We will read texts from a range of authors and genres that reflect, address, and helped produce these changes. Topics we will consider include: the development of both the English language and literary genres; emerging national identity and England’s relationship to the new world; the status of the monarchy during periods of political growth and unrest; and women’s participation in the literary world. Of paramount importance will be students’ development of skills in reading, discussing, and writing about the literature. Specifically, we will work on three kinds of skills: (1) seeing a big picture by spanning time and surveying the globe to track the emergence, development, and dissemination of the English language and its literatures; (2) focusing carefully on key literary texts and some strategies for interpreting them, or “close reading,” of poetry, prose, and drama; and (3) positioning your interpretation of a literary text in relation to other scholarship on it. 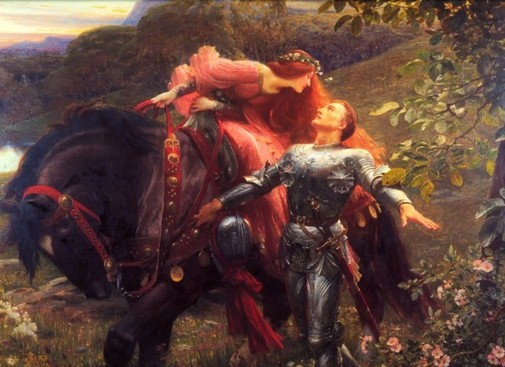 Sir Frank Dicksee, La Belle Dame Sans Merci (1901)
Romance in the Anglo-American Canon (2011-2012)
Romance has a long and complex history as a generic mode.  It was once aligned with fairy tales and chivalric stories about heroic knights, monstrous dragons, and arduous quests.  The genre dramatized serious moral and political issues such as virtue, duty, and sovereignty through symbolism and allegory, and yet the genre was sometimes considered dangerously entertaining and provocative.  Over time the genre has been denigrated as “low” literature, but it tenaciously persists in both popular and literary cultures. This course will sketch out the development of the genre in the Anglo-American tradition by looking at several key examples of the genre in poetry, prose, and drama.  We will not only survey some of the most popular and loved literature in English, but also question how each age adapts the generic mode of romance to outline the boundaries between virtue and vice at its given historical moment. 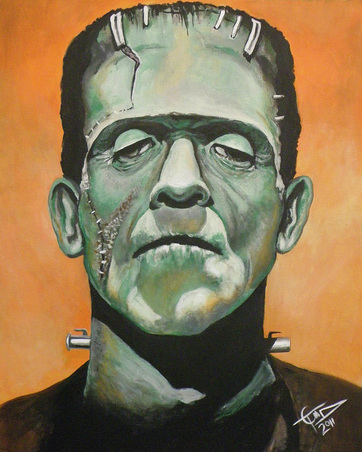 Tom Carlton, Frankenstein (2011)
Monsters, Madmen, and Murderers (2010-2011)
What constitutes the monstrous?  Conversely, what constitutes the beautiful?  How do particular authors use representations of the grotesque and the beautiful to deal with the topic of boundaries?  How does the monstrous function in the world of a text?  How does monstrosity function for individual identity and for social identity?  How can a text itself become monstrous?  Over the next ten weeks, we will explore this general theme through focused units on content and form with an eye toward thinking critically about the issue of monstrosity.

Often, we will read texts in which the monsters are literal monsters: creatures like Frankenstein and Mr. Hyde, who are not exactly human, will dominate these texts.  Other times, we will examine human beings who become monstrous through their actions.  We will pay special attention to how an author constructs the monstrous in relation to the beautiful.  By looking closely at binaries associated with monsters and monstrous characters, we will discuss and write about the philosophical underpinnings of—and contradictions within— mythologies of the uncanny and the grotesque.
Proudly powered by Weebly